The headline warns of “civil war.” But although the Guardian uses militaristic euphemisms for campaign contestations across the length of its recent political analysis, the emphasis is decidedly on the more “civil” side of that equation, as much as it can be within the context of our current extreme political climate.

The Republican’s presidential bid appears to have become the campaign equivalent of the last days of the reich, when Germany’s leadership raged at bearers of bad news from the battlefield, ordered non-existent divisions to launch counteroffensives, and embraced a nihilistic plan to burn it all down and take everyone along.

The difference is, unlike then, there seems to be little awareness of impending defeat or understanding of how it came to be. Instead, attitudes are like those after the first world war when Germans on the far right coined a word for their myth of betrayal: Dolchstoßlegende. …

Republicans have started to fear that 8 November will not be the end but rather the beginning of all-out civil war, asking whether Trumpism can survive Trump, and whether those who support him can survive his candidacy. …

“It’ll be a war,” said Rick Tyler, a political analyst and former spokesperson for the primary runner-up, Ted Cruz. “The Breitbart wing is going to try to impose its will on the party and its brand of Republicanism, which is win at all costs without a guiding philosophy.”

In Kansas, however, we now see an emphasis on war, as in armed insurrection, which this couple missed in their overview of a Republican Party caving in on itself.

Curtis Allen, Gavin Wright, and Patrick Stein, weren’t intending to respond to a now almost-inevitable Trump defeat quietly. According to the FBI, the trio were planning on detonating bombs at the four corners of a Garden City, Kansas, apartment complex where nearly 120 Somali immigrant reside.

It was to come the day after the presidential election. It was to be, we are left to assume, given the roiling anger exposed by candidate Trump’s rallies, the first shot in a war on Islam in the United States. (From there, who knows? Those who stand up to racist violence? Liberal progressives, generally? Queer/trans folks? Latin@s? Immigrants? Students and academics? History has some lessons about revolution.)

The men are members of a small militia group that call themselves the Crusaders, Beall said. The bombing was scheduled for Nov. 9 so as to not affect the general election. …

Beall said the investigation involved an FBI probe “deep into a hidden culture of hatred, violence” and what amounted to a startling plot. The FBI launched its investigation eight months ago, on Feb. 16.

“These individuals had the desire, the means and the capabilities and were committed to carrying out this act of domestic terrorism,” Special Agent in Charge Eric Jackson said at Friday’s news conference.

That “hidden culture” isn’t so hidden.

On the Facebook page of 49-year-old Curtis Allen we find an intense hatred for Muslims, whom he describes as “a cult,” with links to news of the execution of Muslims in China, the banning of mosques, and images of dead Christian babies, victims of ISIS.

“Folks, according to the Govt. and main stream media, do you know who is considered the biggest threat to the nation? It’s interesting. It’s listed as Veterans, Christian groups, Constitutionalists. have you seen or heard of an attack from any of these groups on this country??”

Of course, we have. See Oklahoma City. See Garden City, Kansas, another potential horror. He got 24 shares.

Allen, a Deuteronomy-quoting alleged Christian terrorist, posted numerous videos on his Facebook page by a man named Ernest Lee of the “Liberty Restoration Committee,” urging his followers to similarly tune in.

The mission of this group is summarized as follows:

“Overly simplified the Plan is to petition the State Legislative bodies to dissolve the current compact they entered into with each other in 1787, our present Constitution, and to then sign a new compact The People’s Constitution for America.  The result would abolish our current Federal Government and create a New Federal Government with new rules to insure that the Federal Government would be put back inside the box We the People NEVER SHOULD HAVE LET THEM GET OUT OF IN THE FIRST PLACE.”

Here is his tutor Lee mocking the many women now coming forward with allegations of being sexually victimized by Donald Trump with a fictitious tale of being held as a sex slave by Hillary Clinton:

Lee yesterday took to Facebook to describe the purported bombing attempt as “shocking,” “revolting,” and against everything he stands for. The LRC seeks to operate within the bounds of political process. He adds: “The tipping point [for armed violence] is a lot further way than some of these individuals think it is.”

Lee says he knew two of the now-arrested, “but I know nothing about the insanity they are being charged with.”

However, a year ago, Allen pleaded with this friends to write down the locations of any places Muslims are “shopping, hanging out” etc. so that after the next terrorist attack the “initial response” can be “much more timely.” Perhaps this is when he got the address for the targeted apartment building where those Somali immigrants live (using screenshot here, in case the page is scrubbed). 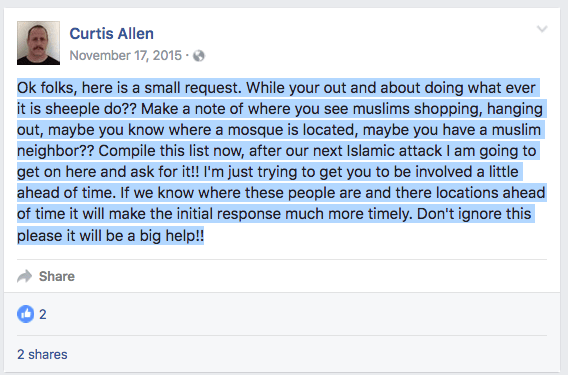 In addition to following Lee’s teachings, Allen has also been motivated in his distrust of the federal government by Austin’s own Alex Jones. Particularly those outlandish warnings of the impending takeover of Texas by our own military.

You know, this guy:

Lately, Lee has been promoting a group operating under the name Kilroy Rising, which describes itself as a “Special Operations veterans political action group … fighting back against the progressive left,” working to ensure a Trump victory, and steering a choice “between remaining a nation and salvaging our Republic, or be transformed by a Leftist insurgency into a Global colony.”

All, it should be said again, is apparently being pursued within the bounds of legal political process.

There are many other groups pushing calls for direct violence, however. Here’s excellent reporting by the Southern Poverty Law Center on the organizations surrounding this trio described as would-be bombers:

A confidential source attended meetings of the group and provided the FBI with information about the defendants’ activities. The criminal complaint alleges that the men conducted surveillance to identify potential targets, stockpiled firearms, ammunition and explosive components, and planned to issue a manifesto in conjunction with the planned bombing.

According to the complaint, Stein said:

“The only fucking way this country’s ever going to get turned around is it will be a bloodbath and it will be a nasty, messy motherfucker. Unless a lot more people in this country wake up and smell the fucking coffee and decide they want this country back … we might be too late, if they do wake up … I think we can get it done. But it ain’t going to be nothing nice about it.”

The criminal complaint release also stated that the “Crusaders” was synonymous with an antigovernment group called the Kansas Security Force (KSF). The KSF shares a name with a much larger antigovernment coalition called the Three Percent Security Force, which claims to have chapters in numerous states and takes its name from the disputed claim that only three percent of American colonists fought the British. The leader of the Three Percent Security Force is the Georgia-based Chris Hill, who goes by the name “General Bloodagent.”

“Govt may kill or detain me. I am GENBLooDAgenT. Cover me. – Domestic Terrorist. We are better Martyrs … I am HoLYWaR.”

Meanwhile Kilroy Rising, which Lee intends to join as a speaker, is preparing for a national tour: 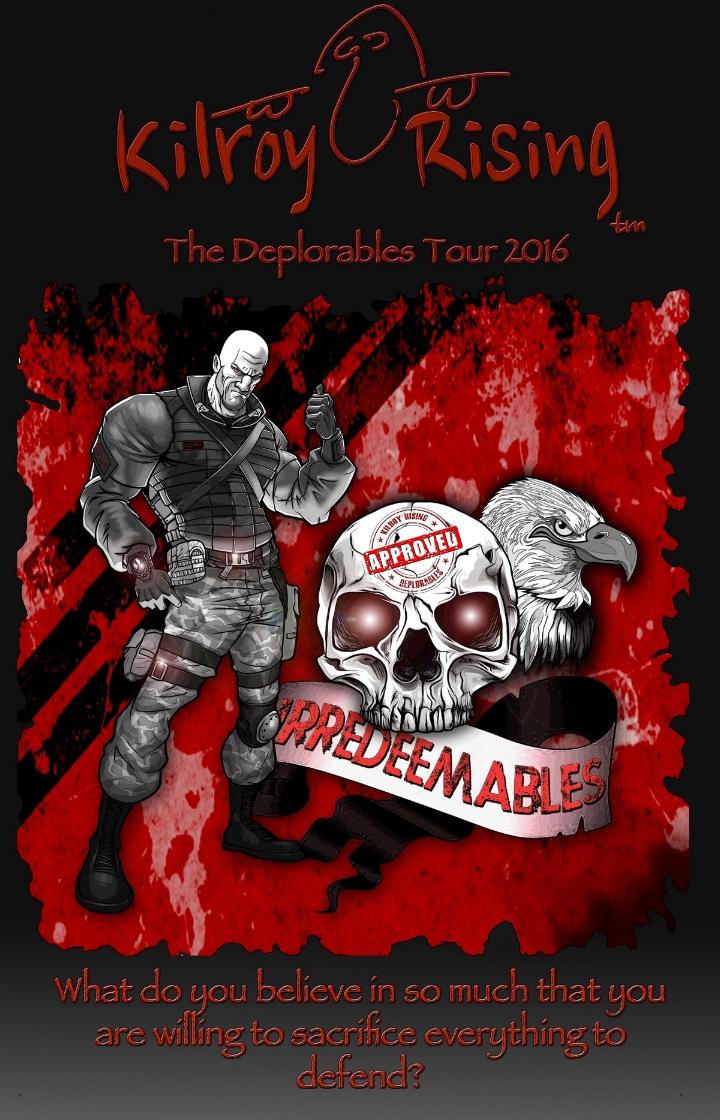 According to Lee, the group will be at the half-scale replica of the Vietnam Veterans Memorial Wall outside Mineral Wells, Texas, on November 12, 2016, should you want to join them for any reason.

Political speech is protected speech. Kilroy Rising and the LRC enjoy those rights as much as anyone. These others, not so much. As a friend once described the First Amendment weighing his first, “My right to speech ends at the tip of your nose.” I am sharing links to these groups here because of the personal and ideological connections with those arrested. But I urge everyone to pay attention. Especially in Texas, perhaps.

Texas secessionists aren’t giving up their fight to make the Lone Star State a true lone state, and they seem to be prepared to link arms with unlikely allies. According to the Los Angeles Times, Texas secessionists cozied up with anti-Western separatist groups at a Kremlin-funded conference in Moscow earlier this week, hosted by a seven-foot Russian dude “who wears crocodile leather shoes” and leads Russia’s Anti-Globalist Movement.

Smack dab in the middle of this secessionist’s paradise—dubbed the Dialogue of Nations—was Nate Smith, the self-anointed “foreign minister” of the Texas Nationalist Movement. Smith joined representatives from separatist groups hailing from Europe, North Africa, and even Hawaii and California. He promised the room that, someday, Texas would be able to “formally exchange ambassadors with your free and independent countries.”

The story gets stranger. According to the Times, Alexander Ionov—the aforementioned crocodile-shoe wearing leader of the small anti-American group that organized the conference—said that the Russian government chipped in with a “grant” of $55,000 to pay for the conference at a swanky hotel close to the Kremlin, and the rest of the money came from private donors from “Texas and other countries.” As the Times notes, Western leaders have long suspected Russian President Vladimir Putin’s administration supports separatist and far-right ultranationalist movements throughout Europe, so it’s no surprise that Russia would welcome the opportunity for a Texit to potentially destabilize the U.S., even though such a move is pretty much impossible. Still, it’s fascinating to think that the Texas independence movement has drawn the attention of Russia.