Here’s a unique way of organizing in resistance to the incoming administration.

Via Paige West and JC Salyer

In the wake of the 2016 US presidential election scholars across the country and internationally have worked to understand the drivers for the election outcomes. We have tried to foresee the potential consequences of a Republican party domination of the executive, judicial, and legislative branches of government for vulnerable populations, for the environment, and for the economy. And, we continue to grapple with the serious threats the president elect and his cabinet nominees pose to the freedom of the press, to citizen’s rights to free speech, and to the various protections that scholars receive through university systems of academic freedom and tenure. At most universities there have been teach-ins, learn-ins, and panels, as well as emergency meetings of departments, faculty action groups, student groups, and other concerned parties. What more can scholars do?

Since the election, one statement we have heard repeatedly from some academics, pundits, journalists, and bloggers who write about academic life, is that scholars need to somehow change what they are doing, and how they are doing it, in order to face this seemingly new political reality in the Unites States. While the latter part of this argument has been addressed by numerous scholars and activists who write and think about race, class, sexuality, and inequality more generally – with clear and compelling arguments about how this is not a “new” political reality for many but rather a kind of contemporary culmination and re-entrenchment of the structures of power and oppression that underpin the entirety of the national political project – the former part of the argument has been allowed to stand with little critique. Do we need to change what we do and not just how we do it? Not necessarily.

While we think that all of us–scholars, activists, journalists, and concerned citizens in general–can always do better work, we worry that by focusing on needing to change what we are doing and how we are doing it we lose sight of what we already do really well. We work to understand the world through research, teaching, writing, and reading. Along with this, we produce knowledge that allows others to understand the world and to work to change it. In addition to this, many of us are also activists whose political praxis is informed by our scholarly pursuits. We are not saying that new forms of thinking and working should not be welcomed. Instead we worry about the idea that scholars are doing it all wrong, and that this is somehow connected to the results of the last election. This suggestion is dangerous and fails to acknowledge the ways in which scholarship and scholarly practice underpins some of our ability to act, react, resist, and transform. 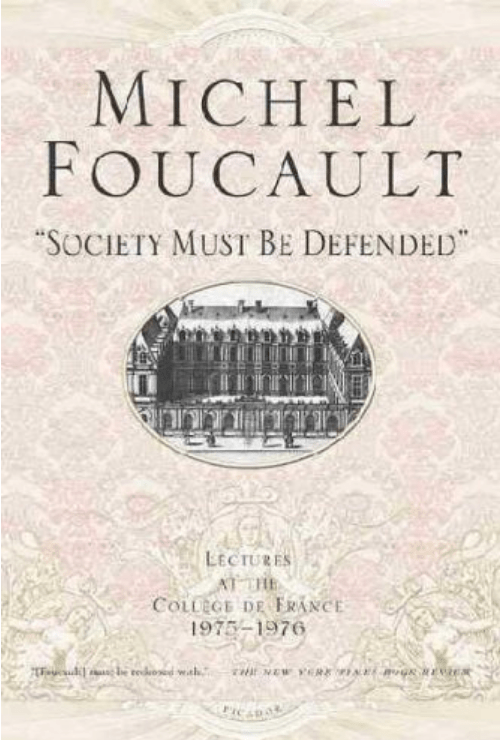 One key part of what all scholars do is read. Reading opens new scholarly connections and understandings for us almost every day. We know and understand the world, and we create new avenues for others to know and understand the world with reference to other people’s writings and insights. For many of us, since scholars tend to also be teachers, we also use what we read every day to help our students become clear and critical thinkers. Scholars read to research and to write and to teach.

With all of this in mind, we, with the help of Savage Minds and the journals American Anthropologist, American Ethnologist, Cultural Anthropology, and Environment and Society are proposing a Read-In on January 20, 2017. We invite all anthropologists and others to come together to read Michel Foucault’s lecture eleven in “Society Must Be Defended” which he delivered on March 17, 1976. This lecture strikes us as very good to think with at this present point: it demands we simultaneously consider the interplay of sovereign power, discipline, biopolitics, and concepts of security, and race. In light of the current socio-political situation where the reaction to activism against persistent racism has been to more overtly perpetuate racism as political discourse, we need to remember and re-think the role of racism as central to, rather than incidental to, the political and economic activities of the state.

Here is how it will work: read lecture 11 between 10 AM and 10 PM Eastern Standard Time on 20 January (or, of course, read it before, and join in on the 20th). If you do not own the book, or cannot get it at your local library, PDFs are available online [like here and here]. Read it alone, in groups, in classes, or anywhere. After reading it, discuss it in person or share your thoughts online: Facebook, Twitter, Instagram, wherever you gather with friends and colleagues to learn and share ideas. We will use #ReadIn so that folks can find each other to converse and collaborate, and we have also created a Read In Facebook page at https://www.facebook.com/groups/170068806806067/

Please join us to read together, read out loud, read in public, and then use it to help us all begin to think about how to understand, help our students understand, and perhaps even to resist, the next four years.