As Día de los Muertos approaches – bedecking local H-E-Bs in all manner of commercialized Latinidad – another familiar ritual begins in the far northern reaches of the hemisphere. Like glacier melt rolling downhill to join with rivers and eventually oceans, a tributary of monarchs moves slowly southward to arrive in the Sierra Madres of México, where for centuries Aztec cosmology has seen these returning visitors as the souls of departed ancestors.

One of the more profound aspects of monarch migration is that part of this journey occurs over several successive generations: it is, in effect, a relay race.* It is appropriate, then, that an effort organized by four Canadians to honor the immense labor embodied in monarchs’ transnational sojourn – and to urge attention to the forces of habitat loss and pesticide use threatening pollinators broadly – should also be a relay.

Support our work. Become a patron for as little as $1.

From a press release titled “The 47 Day Journey South Begins for Runners and Monarchs,” issued by organizers of the Monarch Ultra Relay Run:

(North America) The Monarch Ultra Relay Run, a 4,300km ultra marathon from Peterborough, Ontario to the Sierra Madre Mountains in Mexico, officially launches on Thursday, September 19, 2019. Fifty (50) ultra-runners will participate in this epic adventure across North America at the same time as Monarch butterflies begin their migration south.

The Monarch Ultra is the first attempt to run across Canada, USA and Mexico in order to raise awareness of the resiliency of Monarch butterflies who make the migratory journey every year, and whose populations are in decline. “This multi-day running adventure invites runners to traverse wild and remote landscapes as well as populated urban areas, while building camaraderie, overcoming adversity and sharing a singular adventure with Monarch butterflies,” said Carlotta James, Project Director and Co-Founder. In an international event, a team of filmmakers, pollinator advocates and runners will find out what it means to follow the Monarch migration over seven weeks and across two borders. The Monarch Ultra running route goes through hundreds of municipalities including Toronto, Detroit, Fort Wayne, Cape Girardeau, Little Rock, Texarkana, Dallas, San Antonio, Reynosa, San Luis Potosi, Queretaro, and Macheros, when the runners finally arrive at the Cerro Pelon Monarch Butterfly Sanctuary on Monday, November 4, 2019. …

“This is an opportunity to connect communities in Canada, USA, and Mexico with common goals of Earth stewardship and biodiversity conservation,” said James. “There are many ways to support Monarchs and other pollinators. In addition to planting native milkweed host plants for Monarch caterpillars, it is also important to plant nectar-rich plants for adult Monarchs.” Williams added, “There are still open segments that need ultra-runners, and we would love to see folks come out and can cheer on the runners as they pass
through your city.”

The Monarch Ultra moves through San Antonio twice: first on Thursday, October 17th, when one of the international runners begins her 50km stretch near Schertz, hugging IH-35 to the southwest before veering onto Broadway toward downtown San Antonio. At César Chávez she finds her way to the San Antonio River before heading south of town via Roosevelt Avenue. A small contingent of greeters plans to cheer her on at the intersection of Broadway and Pearl Parkway between 10 and 11am, but she can be spotted at any point along her route through San Antonio (click image below for an interactive map): 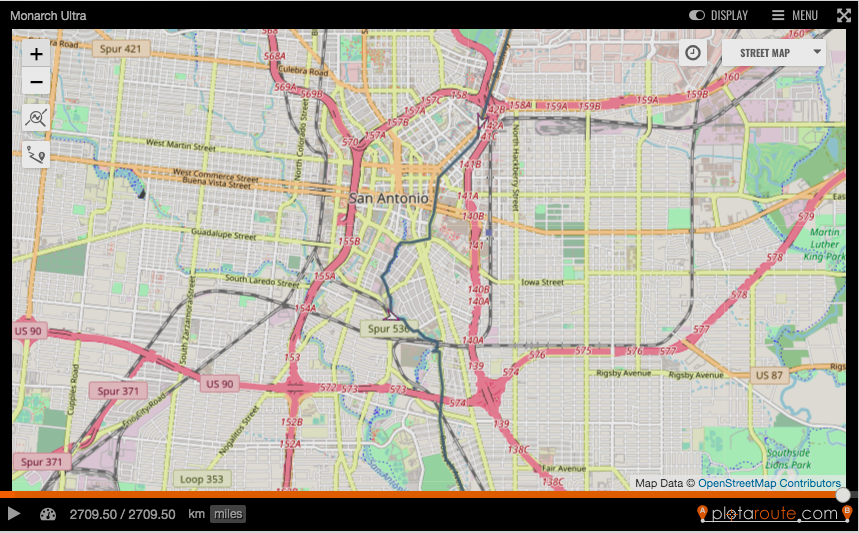 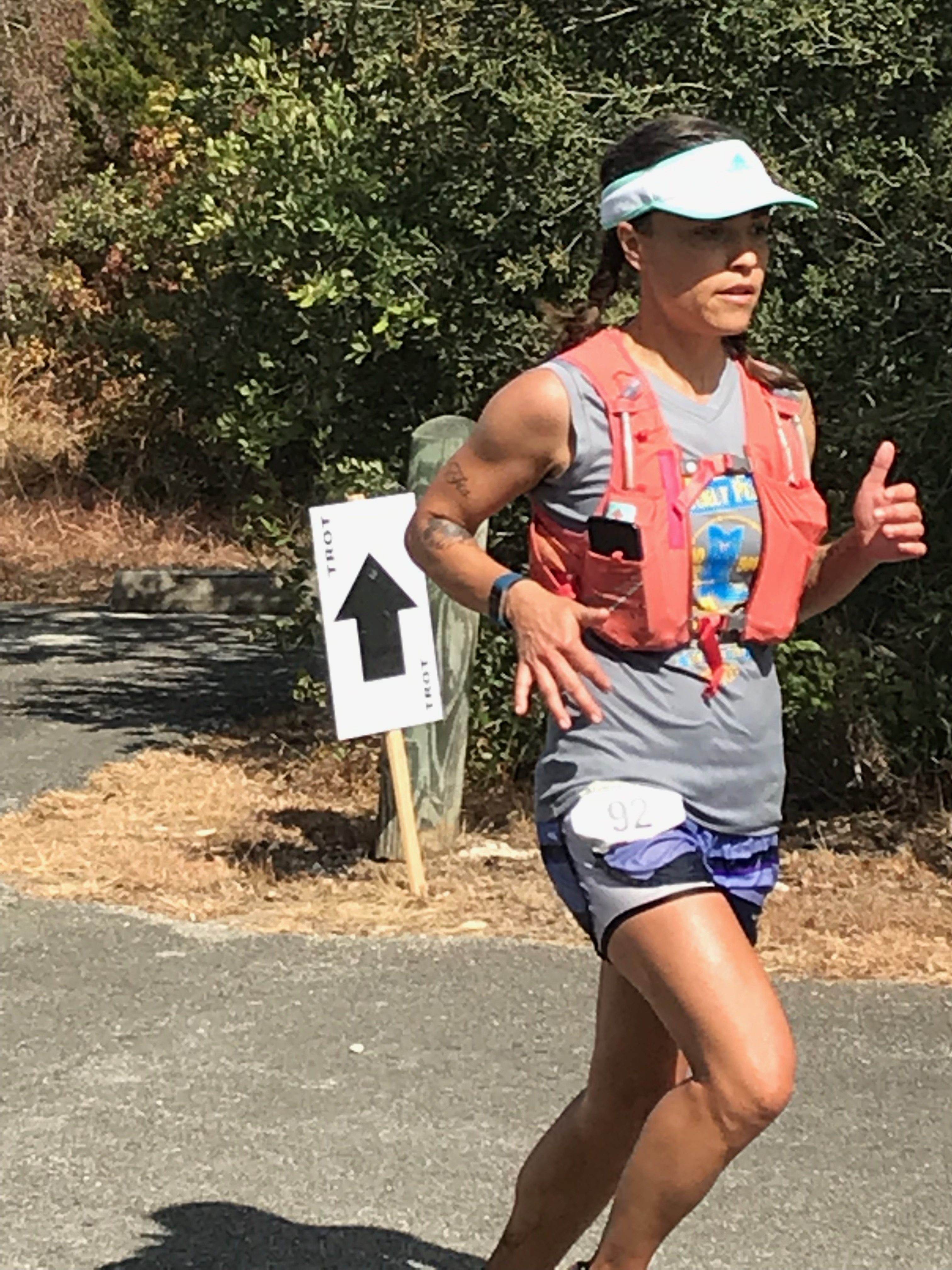 The Monarch Ultra intersects with San Antonio a second time on Saturday, October 19, in the form of Liberty Heise, a local runner, writer, and environmental educator who plans to run a 50km leg of the marathon through rural South Texas, starting near George West and ending near Falfurrias. This past weekend, Deceleration had the opportunity to interview Liberty about her involvement in this international effort, a conversation that moved from her decision to run to the ecology of monarchs to the ethics of our encounters with migrating relatives – be they avian, butterflies, or human.

Asked, for instance, whether there is something about migrating species that can cultivate human ethics of peacemaking and cross-border solidarity, Heise responded:

When I was a schoolteacher and I taught science, I think one of the things that can be used as a metaphor is – you know, migrating [species] are such a miracle, and they’re sometimes such a rare sighting. It’s such an exciting thing to see [for example] a bird that is unusual or is rarely seen coming through. … We have, as a people, become so stuck in a particular mindset about any type of person moving through another environment. And instead of being inquisitive or seeking to understand or trying to build that bridge and see it as something of beauty and be giving, it’s turned into something different. But I do think that that’s there. And I think where that starts is with kids. The more you can get children engaged in recognizing that where you are and what you have to give is a fantastic thing, especially when something is traveling through.

Listen to the full conversation here:

To take part in a month of events supporting refugee rights, check out Migration Month, organized by the Migrant Center for Human Rights.

*Note: A citizen scientist active in pollinator protection work clarifies this point: “The Monarch migration south is actually one generation and not really a relay. The ‘relay’ is on the way back north in the spring when successive generations (generally three or four) get farther and farther north. Each of those generations typically live only 4-6 weeks. The final generation is the one which has a lifespan of several months and completes the long journey all the way to Mexico.”

Support our work. Become a patron for as little as $1.