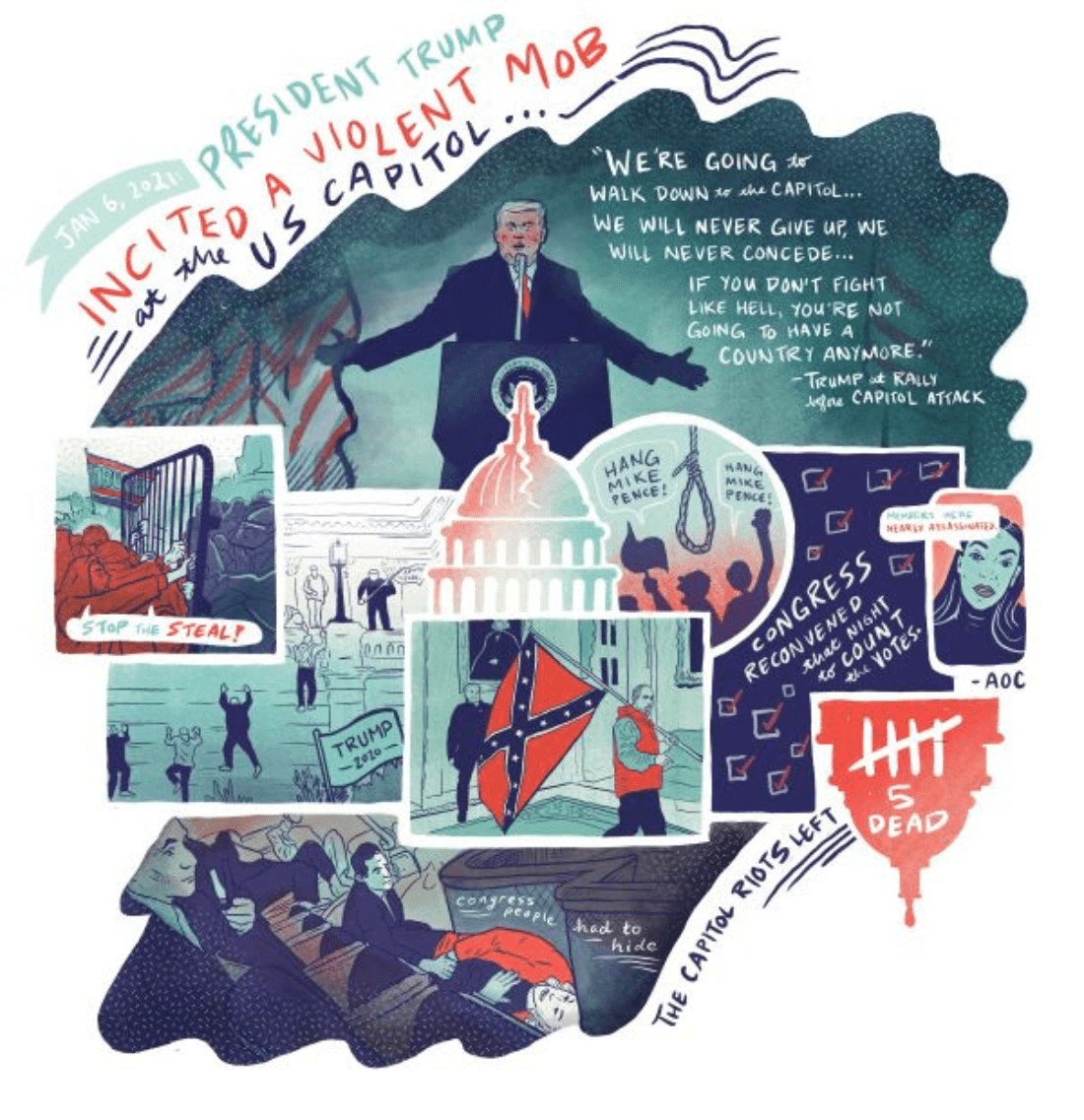 EDITOR’S NOTE: This is the final dispatch from a group called Choose Democracy, who we introduced to readers in an October post just before the historic (and traumatic) 2020 election. Choose Democracy formed for the express purpose of training people to stop a coup should it arise, launching a coup-o-meter “as a tool for navigating a dangerous moment in history when the possibility of a coup in the United States was clear and present.” ¶ We underwent this training, conducted by veteran civil rights organizer and sociologist George Lakey, and afterwards followed Choose Democracy’s updates as the political landscape lurched from the disinfo campaign of Trump’s “stop the steal” narrative (what historian of fascism Timothy Snyder, in one of the best analyses of Trump’s failed coup I’ve read, refers to as his “big lie”) to ludicrous but alarmingly audacious legal challenges and congressional lobbying to, finally, the violent white nationalist insurrection of January 6 that landed the coup-o-meter in “attempted coup” territory. ¶ Always hewing closely to understandings of coups drawn from historical research, Choose Democracy frequently militated against inflammatory rhetoric and urged us to keep our eyes instead on the “pillars of power”—the institutions that would have to, and ultimately did not, back Trump’s attempted power grab for it to be successful. It also urged us to take seriously Trump’s frequently laughable (but always earnestly plain-spoken) grabs at autocracy by preparing ourselves to halt any coup attempt through massive nonviolent resistance. Throughout this whole event, I found their analyses of authoritarianism and pro-democracy movement both substantive and inspiring. ¶ Yesterday I received the last of these email updates and thought I’d pass it along for its smart debrief of the past two months. Appreciation for their work and for recognizing the wisdom of folding up shop when you’ve done what you set out to do—which of course is not to say there is not much work to be done, as they state below. —Marisol Cortez

By the Choose Democracy Team

Yesterday we saw the transition of power in the form of a ritual known as Inauguration Day. It was a moving day for a moving moment. For many of us, it was a moment to breathe a huge sigh of relief.

Before emails bombard you asking you to prepare for the next fight ahead, we want to send you an email encouraging you to take another exhale. It’s okay to exhale. It’s okay to not stay reactive, to not be always on edge, and to not lose sleep over the latest political maneuvers. To be human in this moment is to recalibrate and detoxify.

Yes, there’s much work to be done to address the roots of last week’s attack, to advance democracy, and to combat the underbelly of misinformation and violence. But that work isn’t best done when we’re stuck in a reactionary, hypervigilant, reptilian brain. So do all of us a favor and allow yourself the space to detoxify.

We’ve promised we would close shop on January 21st and so this is our last email. We wanted to take a moment to explain that decision and leave with a few parting thoughts.

We’re well aware that Democracy has not been unequivocally Chosen — so we can’t exactly say “mission accomplished.” But Choose Democracy was born to alert people about the very real possibility of a coup (check), to prepare thousands how to stop an active coup (check), to use levers available to us to help deter a coup (partial check), and to prepare a national response to stop a coup if warranted (check).

We’ve trained over 10,000 people, reached millions of people with our articles, and built ready-to-run plans for coordinated strikes if an active coup situation unfolded. We can’t predict the future — and while we will officially close down we’re leaving a shell of an organization in case it needs to arise again.

We transitioned our website to include the story of the past year and curated resources in the event we need to stop a coup in the future (in the U.S. or elsewhere). History has shown us that organizations who hang on after completing their mission too often turn into vampire organizations—they linger without a clear purpose.

The field of nonprofits is littered with organizations who did something good once, but are now adrift. They stick around to keep fundraising, sucking attention, rewriting strategy plans, and following the times rather than leading on the times. Letting organizations die is a gift for the future—just like a crowded forest needs the space for old trees to clear out so the new can arise.

Our democracy rests on much more than the act of voting. We saw this over and over again the last several months. There were so many key moments by citizens that kept history from turning even more sour:

If any of those pillars had completely buckled, we would be in a very different situation. We might still be engaged in prolonged consumer and labor strikes to try to wrestle control back from a successful coup. (Don’t believe us? Read Stephen Zunes’ analysis in Yes Magazine.)

Instead, the coup attempt flopped within hours.

As we look to the future, let’s look to the past and honor all the work, the contributions, the sacrifice, the risks, and the courage.

MANAGING OUR FEAR OF VIOLENCE

January 6th left many terrified, terrorized, and traumatized. This engenders a normal and healthy internal response. Our hearts beat faster and the fight-flight response pumps adrenaline into our system.

If we’d managed to live a life protected from this country’s violence, this was a wake-up call. For others, it was just a reminder of the strong thread of violence woven in this country’s history. Many of the symbols at the Capitol insurrection harken directly to those violent lineages of racism and anti-Semitism: Confederate flags, nooses, “Camp Auschwitz” shirts.

Whether this was a wake-up call or a stark reminder, it’s a chance to work on our fears.

How we handle fear determines a lot whether we’re useful to the movement for liberation or whether we contribute to the cycles of hate.

This seems unlikely to be the last act of violence. And so it makes sense for us to learn from this moment about our own reactions—and practice being more present and able to react wisely.

Meditative practices, like breathing, help us more quickly ground our heartbeats and move from our reptilian brain. Accepting—rather than pushing away—reality is part of that. So is getting a good sense of U.S. history. And having a community to lean on—so you don’t feel alone in these moments. We strongly recommend the practices over at FindingSteadyGround.com.

WATCH FOR THE CRASH

After a big spurt of adrenaline in our system, there’s a natural next step: the crash. It’s an up-and-down cycle: violence, the body rapidly mobilizes, and then the body crashes…

We’ve been braced as we had been counting down to Inauguration Day.

Movement therapists remind us of the importance of getting that adrenaline out of our bodies: walk, run, exercise, have sex, do whatever makes you sweat and helps get those toxins out of your body.

Spend time laughing and crying, recounting what scared you with people who can listen. And if you do crash, be gentle with yourself and seek community support. If 2020 was a sprint to survive, we think 2021 is about finding our pace for a marathon ahead.

THIS IS NOT THE FIRST COUP

Many of us watched the insurrection and felt the terror and pain of an attempted coup in the United States. Most haven’t seen a dramatic insurrection or coup quite like this.

But many people have experienced coups. One person who has lived through 6 coups (several backed by the United States) wrote to us:

“I send my love to all of the Choose Democracy family and your country. Watching the images was shocking. And as I pray for your country, I also pray that it changes how your country moves in the world. With less arrogance and more humility.” 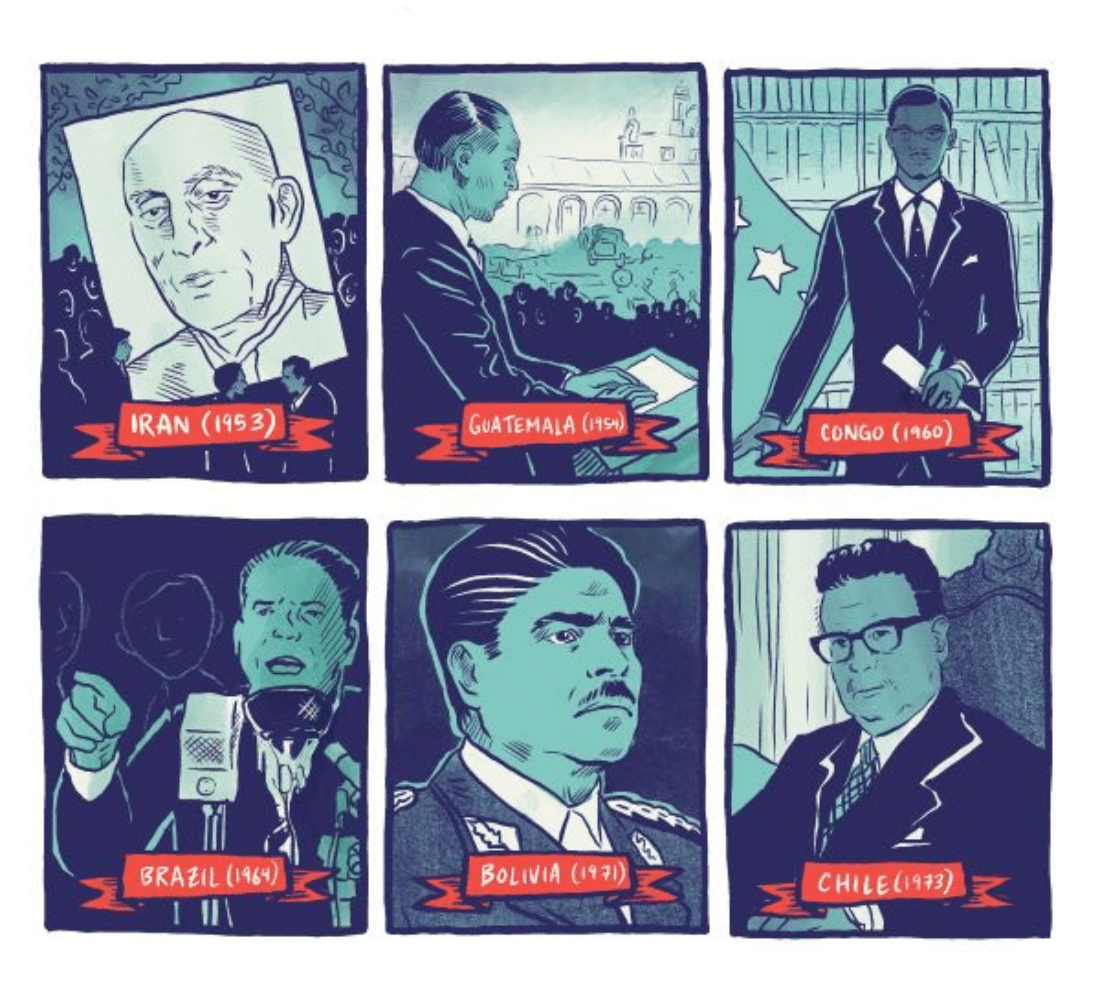 If you were angry at Trump for his coup maneuvers, imagine the coup plotters being a foreign country on the other side of the planet.

During the Great Depression in the 1930s we had enormous political polarization, with old school Nazis filling Madison Square Garden for a rally and frequent bombings and KKK lynchings. President Franklin D. Roosevelt was trying to do some progressive things and several figures in the elite began to plan a coup. The plan was dropped because they saw it couldn’t work—democracy-loving progressives were too well-organized.

We can expect more political polarization because the economic inequality has been accelerating; some economists say it is the most extreme in U.S. history. This takes us back to the work of building mass movement organizations that can achieve positive goals with accountable, anti-racist, and pro-democratic policies.

There is a severe breakdown of our country afoot. It’s not going to get better without effort. We certainly can’t fix it by staying in reaction mode to each act of violence—which may grow dramatically. We have to handle our fear and our internal state so we can keep working on the big issues—the positive visions.

We didn’t avoid a successful coup by focusing on the negative—we did it by shoring up systems of democracy: registering to vote, voting, organizing, pressuring officials to act right, counting votes, debunking myths, preparing if things got worse, and being strategic about when we act.

That’s our parting hope: to lead with eyes open, feet on the ground, and hearts wide. To be led by love and strategy.

We love and thank you all for journeying with us.

PS: If you want to keep journeying with our co-director Daniel Hunter, who has been the primary writer of our emails, he writes occasionally and you can sign up to his list here.

Published by permission of The Choose Democracy Team.