In the summer of 2020, I asked Jack Elder to write a piece remembering Laura Sánchez, his friend and confederate in the Sanctuary movement. Now in his late 70s, Jack has been active in migrant rights, anti-war, and environmental justice movements all his life. In the 1980s, he made national headlines when, as the director of Casa Oscar Romero, a shelter in San Benito, Texas that offered refuge to Central Americans fleeing U.S.-backed wars and death squads, he was charged twice with, and the second time convicted of, “landing, transporting, and conspiracy” for driving Salvadoran migrants to the bus station. Federal judge Filemon Vela offered two years’ probation rather than jail time if Elder agreed to leave Casa Romero immediately and stop talking to the media about Central America, U.S. foreign policy, the Sanctuary movement or to any Central Americans. Unable to abide by those conditions, Elder refused the offer and in 1985 was sentenced to 150 days in a halfway house in San Antonio—”as it turns out,” he recalls, “mere blocks from Laura’s house.”

I asked Jack to write about Laura because I had learned about her life only after her death in 2016, when activist and former councilwoman María A. Berriozábal emailed a note about her passing to a few friends. Always deeply involved in struggles for human rights and justice for the most vulnerable, María had been in office when Laura and her husband Marcos had converted their family home in San Antonio into Proyecto Hospitalidad, a waystation for Central American refugees seeking asylum in Canada along an “overground railroad.” I invited both Jack and María to share their memories here because I figured that if I hadn’t known who Laura was, chances were neither did many others from my generation and those younger.

I began collecting these memories in the final months of Trump, when it felt like remembering someone like Laura Sánchez might encourage us to maintain our focus on what ultimately matters: not the cruelty of race-baiting strongmen but rather the possibilities for passionate noncooperation, solidarity, and witness. This is no less true under a Democratic administration. Though we’ve seen victory in the defeat of Trump, the real work remains, and in many ways becomes all the more crucial as we relax our hypervigilance. And so the need persists for models who can anchor and guide our focus.

Finally, I want to mention that Jack originally gave this story to me hard copy, typed on a typewriter with corrections and acentos inserted by hand. I’d wanted to do a podcast interview, but Parkinson’s, acquired on account of exposure to Agent Orange during Vietnam, has affected his speech. Retyping his story here, I remember what an intimate kind of reading it is to reproduce someone else’s writing. These are small and quiet stories, but they preserve a much larger, louder history—continuous with present-day efforts to protect migrant communities and asylum-seekers from the terror of mass detention and family separation—of San Antonio’s role in the Sanctuary movement of the 1980s. 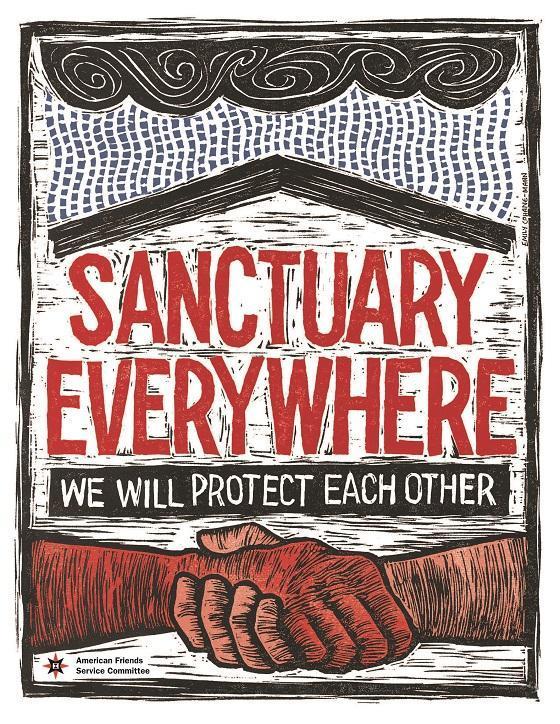 Two large houses on Courtland St. near the San Antonio College campus are a good place to start this story. One of the houses, rented by Lynn Parrish, a Trinity student, was the initial meeting place of Latin American Assistance, a local solidarity group. The other house, a few blocks away, was the home of Marcos and Laura Sánchez.

By 1980s, Nicaragua Assistance, a group formed in San Antonio by doctors and medical students to raise awareness of the struggle in Nicaragua between the Sandinistas and the Somoza regime, changed its name to Latin American Assistance to reflect the armed conflicts which by then had enveloped Guatemala, El Salvador, and Honduras.

LAA’s activities—letter writing campaigns, protests, teach-ins, and fundraisers—gradually attracted a core of volunteers who were ready to respond to the next, inevitable challenge: the arrival of Central American refugees to our border.

Enter Laura and Marcos. They were involved with LAA and were ready to help. In thinking back to those years, I am struck by the intensity of their compassion and their entrega.

They opened up their home to refugees, founded and ran Proyecto Hospitalidad, opened a chapel in their backyard and welcomed volunteers, all while raising four girls and becoming padrinos to my wife’s and my youngest son, John.

Laura contacted the Canadian counsel in Houston and invited him to San Antonio to interview refugees, the first step toward gaining political asylum in Canada. Laura also nurtured relations with doctors she knew in order to get physical exams for the refugees, an essential part of the application process for political asylum. And an orthopedic surgeon facilitated amputation operations for the refugees who had fallen under the wheels of freight trains and been mauled in the process.

On a visit to Marcos and Laura’s house one morning I entered the living room and found myself amidst a group of a half dozen men, all in wheelchairs, all amputees, watching El Norte.

If Laura drew strength and inspiration from the refugees, from their determination to “choose life” for themselves and their families, then those of us who worked with her were likewise inspired by her tireless ministry and her willingness to challenge elected officials and the church hierarchy to enact just policies that would aid the refugees who were clearly victims of our country’s foreign policy.

The range and depth of this administration’s dehumanizing immigration policies call for an array of responses. RAICES and the Migrant Center for Human Rights are two groups working locally to represent detainees and shed light on the abhorrent detention policies to which they are subject. In the early 1980s I visited a camp for Guatemalan refugees in Chiapas. I asked Bishop Samuel Ruíz of San Cristóbal de las Casas how I could help.

“Jack,” he said, “we don’t need money as much as we need you (i.e., Northamericans) to change your hearts of stone into hearts of flesh and blood.”

To be compassionate, in a word. And this is made easier when we read, learn a second language, and believe that we really all are brothers and sisters.

Laura Sanchez was a gem.

She always gave credit to her parents for the values they taught her: faith in God, in humanity and hospitality. For her, hospitality was the greatest gift we could give anyone. Because of that, in the late 1970s, she and her husband Marcos opened up their home to families from El Salvador, Honduras, and Guatemala, in particular women traveling alone, women with their children, and children traveling alone. In the early 1980s, after Archbishop Oscar Romero was murdered, he became her muse in her work as the number of refugees increased.

There were no services in the city for these people, so Laura and Marcos—a mailman at the time with whom she was raising four young daughters—sought help from anyone who would give it to them. By then Laura had created an organization, Proyecto Hospitalidad, in their home. She got doctors, dentists, hand and orthopedic specialists, other medical personnel, and some friends who would help her with small donations of food. She was able to gather a goodly group of volunteers from the community who could assist with various needs of the refugees. She worked closely with Archbishop Patrick Flores to extend services—mostly quietly—to the increasing number of people who went to her for help.

During the 1980s, at the invitation of families who had been divided, she traveled to El Salvador to find out for herself what was going on over there. She was impacted deeply with what she saw. The stories that the refugees brought to her now were real. From then on she maintained ties not only with people here but with their family members still in El Salvador.

She and Marcos transformed their garage into a small chapel. It was like something out of some village in México or rural areas in Central America. She got priests to come and offer mass. Babies were baptized in that chapel, people prayed for healing as they played on the guitars they had brought (miraculously!) with them as they came into the U.S. That chapel, and the masses and festivities at the house, became a source of strength for the refugees, but also for Laura and her family and those of us who were privileged to attend those events. Laura and Marcos’s home became a place where the refugees sang their own songs, ate the food of their country, and created community.

Laura was an unusual “service provider” because she not only took care of people’s worldly and even spiritual needs–she also engaged politically and was afraid of no one. She held everyone accountable. She pushed elected leaders accountable like few others did. Her profound pain after she saw the crimes against humanity in El Salvador was that the U.S. was training the violators at the School of the Americas, and she spoke against this over and over and over.

I know this history, because we worked together on these issues even as the press was slow to pick up the story. Of necessity, much of our work was done under the radar. We would organize on-the-spot press conferences when local police violated the policy of not arresting undocumented people AND not going onto church property to question or arrest the undocumented. She got involved in city issues which impacted the immigrants and also took part in neighborhood struggles and other issues affecting vulnerable people, not only the refugees.

One of her strongest allies at the time was Kevin Moriarty, who was the director of Human Resources [at the City of San Antonio]. He lived across the street from Laura and Marcos. He offered her incredible personal support and very quietly opened doors for resources, so that the City officially developed a “look the other way policy” when people were dealing with the undocumented.

In the mid 1990s, Laura closed the work of Proyecto Hospitalidad as the wars in Central America dwindled down and resources became more difficult to secure. She also started getting very sick. I believe that all the work and stress and pain of her work affected her health greatly.

When her health continued to fail, she went to live with her daughter on the East Coast. In 2016, she came back to San Antonio, to her beloved home, to die. At the end she died in peace with her family members around her. In December of 2020, Marcos joined Laura as he passed away a few days before Christmas.

For me Laura was my muse. Her strength, support, friendship and love made joyful my own work. There was no stronger ally than Laura when I had political campaigns. We worked on projects together. Her community of refugees was also my special community.

Proyecto Hospitalidad not only assisted the people fleeing their countries, it offered all of us a lesson in how to live out the message of peace, justice and love.

To join up with local fights for refugees, migrants, and the international right of asylum, connect with SA Stands, Interfaith Welcome Coalition or the Migrant Center for Human Rights. Along the U.S.-Mexico border, Angry Tias and Abuelas of the RGV and Witness at the Border are doing crucial work to respond to and document the human rights abuses of asylum seekers forced into tent encampments on account of the Trump Administration’s “Remain in Mexico” policy. Or, check out this free screening of The Subversive Act of Seeing: Witness at Tornillo, screening online on Thursday, February 11 at 6:30pm CST.